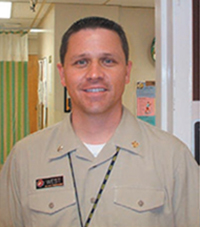 Why did you choose your specific health professional career?

The reason I chose my specific career had to do with a challenge I faced. I was a gymnast when I was younger but I suffered an injury and I had to do physical therapy. I found each rehabilitation visit very painful. I decided I could do it much better and with more compassion. This is the reason I started pursuing a career in physical therapy.

Describe any obstacles or barriers to success that you encountered along your health professional career path and how did you overcome them?

There were a lot of obstacles on my pathway to physical therapy. I would have to say the obstacles were academic, financial, and the delivery of misinformation about physical therapy. My college was paid for by an athletic scholarship because I was a gymnast. When I went to college, I didn’t know what to study or what to do initially. But I knew that I really wanted to be a physical therapist. So, I saw a counselor and asked about it. The counselors at my school counseled me into thinking that there was no way I could be a physical therapist because my grades were not good enough. However, I started calling and mailing different physical therapy programs for information about their programs. I found that I could graduate with any major as long as I had the necessary prerequisites. I began to apply to PT schools just before graduating from college. The first year I applied I didn’t get accepted. I called for feedback. I was told that I didn’t have experience and that although my overall grades were not good, I had great science grades. So I got a job as a physical therapy technician/aide and worked in a physical therapy clinic. I loved it and I was able to experience the hospital and outpatient setting. I applied again the following year and was eventually accepted by the University of Miami after being placed on the alternate list. A co-worker, told me about the IHS scholarship program. About a week before school started in May I received a call from the University of Miami saying, “We just had another cancellation, we have an opening, do you want to take it?” I said “Yes!” I loaded up the truck and moved to Miami. Once there I learned that the IHS scholarship program didn’t start until August so I had to pay for that whole summers’ tuition. The University of Miami is a private institution so it cost ten thousand dollars just for that summer’s tuition; I received a student loan for this. So I was very thankful to get the IHS scholarship to pay for all of my school. It was wonderful and such a blessing to make it through the program. So those are a couple of experiences that helped me become a physical therapist. Initially, I think it was my sports activity that  really drew me to physical therapy. However, physical therapy is not just about sports. It is working with sick and injured people as well as the geriatric population.

What do you do in your current job?

I am a physical therapist and the Deputy Chief of Physical Therapy here at Phoenix Indian Medical Center (PIMC). PIMC is the largest Indian Health Service hospital in the United States. Unfortunately though we are the largest hospital, we have almost the smallest staff when it comes to hospitals. There are I believe 36 IHS hospitals in the US. Of those there are smaller and larger hospitals. Of the larger hospitals, we have the least amount of staff. Tuba City, Gallup, Shiprock, and Ft. Defiance have more physical therapists than we do. We probably see three times as many patients as they do. It is a unique situation.

What advice do you have for American Indian/Alaska Native students who are interested in health careers?